Hulu’s breakout mystery-comedy is back. Vanity Fair has your exclusive on what’s next for the Arconia trio, new characters played by Amy Schumer and Shirley MacLaine, and much more.

There’s so much talk in Only Murders in the Building’s second season about the pitfalls of making a second season that one might wonder, for a moment, whether the show is setting us up for disappointment. Life imitates art in Hulu’s hit comedy, after all, and as Charles (Steve Martin), Mabel (Selena Gomez), and Oliver (Martin Short) embark on a dangerously funny new adventure—and, in turn, follow-up podcast—they consider the pressures of living up to the hype. “It was a bit of a trick,” showrunner and cocreator John Hoffman tells Vanity Fair in his first interview about the new season. “I found great comfort in the writers room that anything that would come up about our season-two challenges could find its way into the narrative.”

Indeed, such meta touches only reflect the confidence of a series expanding on an enormously successful freshman run. Following three strangers who band together to investigate a death in their Upper West Side building—and make a lo-fi podcast about it—Only Murders offered smart crime fiction that doubled as a biting ensemble comedy. The second season, premiering June 28, cleverly twists its whodunit structure onto our lead characters: In the aftermath of solving the murder of neighbor Tim Kono, the Arconia’s armchair-detective trio sops up glory and fame—until Arconia board president Bunny (Jayne Houdyshell) is found dead, bloodied while wearing an Only Murders merch sweatshirt, in Mabel’s apartment. The prime suspects are hilariously obvious. “Do you try and exonerate yourself, or do you take advantage of this weird New York–famous moment that happens, where you’re on the front pages?” Hoffman says of the new season’s primary tension. “It was a great edge to write on, the back-and-forth of conflict that allows for, ‘Be careful what you wish for.’”

If putting Mabel, Charles, and Oliver in the hot seat marks a narrative departure for Only Murders, the action surrounding them in season two represents a kind of deepening: more celebrity guest stars, more clashes between classic and modern, more insight into the prewar apartment building where the series takes place, more cliffhangers and twists. “That feeling of being embraced [in season one] gave great buoyancy to ideas and trust that the audience would go with us,” Hoffman says. “It just made us more confident in our approach on season two.”

Consider the core relationships of Only Murders: Just as Mabel, Charles, and Oliver were getting to know each other, the well-known actors who play them were honing their dynamic too, finding humor in their generational divide and a kind of barbed affection. Those qualities are now baked in, allowing room to explore new angles. Mabel meets a love interest in Cara Delevingne’s Alice, an art-gallery owner of her own generation who puts Mabel in touch with a side of herself she’s been somewhat neglecting since the show began. Gomez and Delevingne are longtime friends, bringing quick, sexy intimacy to their onscreen rapport. “It was amazing to have the two of them know each other and feel comfortable,” Hoffman says. “It’s a little sparky in all the right ways that makes you feel like, Oh, someone’s opening someone’s world.” Inevitable clashes with Oliver and Charles amp up the intensity: In one episode, Mabel throws a party that the pair attend, and, well, “It’s a little bit rough,” Hoffman teases.

The Only Murders world also opens up around them. Bunny’s death unlocks new secrets of the Arconia, both in its literal design and in its fascinating history, which connects to Charles’s childhood. Hoffman says this development reflects his writers’ core interest in “this understanding about place and time and history, and how lives are lived in places like that—in a communal way, in an apartment building—with secrets and great mysteries that factor into them.” Charles’s father enters the story in flashbacks—no spoilers as to his exact connection to the building—which adds an extra layer of mystery to the plot. The show expands its series-long mission to, Hoffman says, “know the history of each of these people with the building…the secrets that are unfolding.” He adds, “There are the unknowns that catch you off guard emotionally.”

In this season’s second episode, Martin Short yells at Shirley MacLaine, “Amy Schumer is not a thief!” You’ll need some context as to what’s going on here. Schumer plays a slightly unbearable version of herself, and a new resident of the Arconia. Short’s Oliver is trying to convince Bunny’s icy mother, played by MacLaine, that Amy Schumer did not steal a $1 million painting that Bunny owned and displayed in her home—even though it’s now inexplicably on Schumer’s wall. Yes, a lot going on here—but trust, it’s all fully in this show’s kooky spirit. We watch a range of New York iconography colliding—Schumer, a comic rooted in the city’s aughts scene; MacLaine, who knows a thing or two about legendary Manhattan buildings (see: The Apartment)—in a moment that feels fresh, nostalgic, and totally silly at once.

Schumer takes on a pivotal role in the season’s first episodes, and was “the most immediate yes we’ve gotten on the show,” says Hoffman. She knew Steve Martin from when she starred in his Broadway play Meteor Shower, and entered as a big fan of the show. Her self-obsessed character expresses interest in adapting the Only Murders podcast for the screen—she wants to star in a feminist antihero version told from the perspective of Jan, the season-one murderer played by Amy Ryan—but needs the creators to, erm, clear their names of this latest killing first. It’s a heightened take on Schumer’s persona, to be sure—and one that fits into the show’s zany aesthetic template: She’s introduced in an outfit that pays homage to Annie Hall, a touch that Hoffman says was the comic’s idea.

MacLaine, meanwhile, hadn’t done a TV series since recurring on Glee nearly a decade ago, and relishes every tart line Hoffman and co. throw at her. She and Hoffman have known each other as friends for a long time; they teamed up back in 2016 for an adaptation of the memoir Bettyville that remains in development. She was so thrilled by the prospect that she traveled from her home in Santa Fe to do it. “She’s 88 now and as sharp as they come,” Hoffman says. “The beautiful thing for me was Steve saying, before she arrived, ‘I cannot believe I’m going to get to do things with Shirley MacLaine.’ Then he went on and on about seeing her when he was young. That really moved me.” (MacLaine’s role of Bunny’s grieving mother gets enmeshed in the season’s central mystery, and Hoffman teases an “exciting” arc for her as the season goes on.)

It’s a lot of new star power for a show that wasn’t exactly light on it to begin with. Plus, there’s a huge revolving door with potential for more additions. (With Schumer subleasing the penthouse unit that Sting occupied in season one, “that place will have some more subleasing going on there,” Hoffman hints with a chuckle.) But equally rich are the NYC theater veterans who star as Arconia denizens, and get more of a chance to shine this go-around. Jackie Hoffman’s Uma and Michael Cyril Creighton’s Howard take up Bunny’s posthumous arrangements, which puts them in frequent, cranky conflict with our heroes. Jayne Houdyshell returns too, in poignant glimpses of Bunny’s life before her death. For Hoffman, spotlighting the late Arconia board president marks yet another ode to the city that defines his show: “I find them heroic, all of these women in New York that we see on the streets every day, pushing their carts, getting through it.”

But of course, we begin and end with Charles, Mabel, and Oliver. Can they prove their innocence? What will they do with all this fame? Can season two—of the podcast, I mean—live up to season one? “A whole theme of the season is being framed, and then reframing everything for the world at large to understand what happened to this woman in this building,” Hoffman says. “The emotional stories for our three main characters—that is our true connective tissue, in a world where a mystery television series tends to delve not so deeply a lot of times.” Accordingly, the more story Only Murders tells, the more opportunities present themselves—specifically, a hook for a possible season three that the writers already have in place (it’s yet to be renewed).

“The world just keeps opening up,” Hoffman says. “I think it’s because of the number of apartments you can have in a building.” 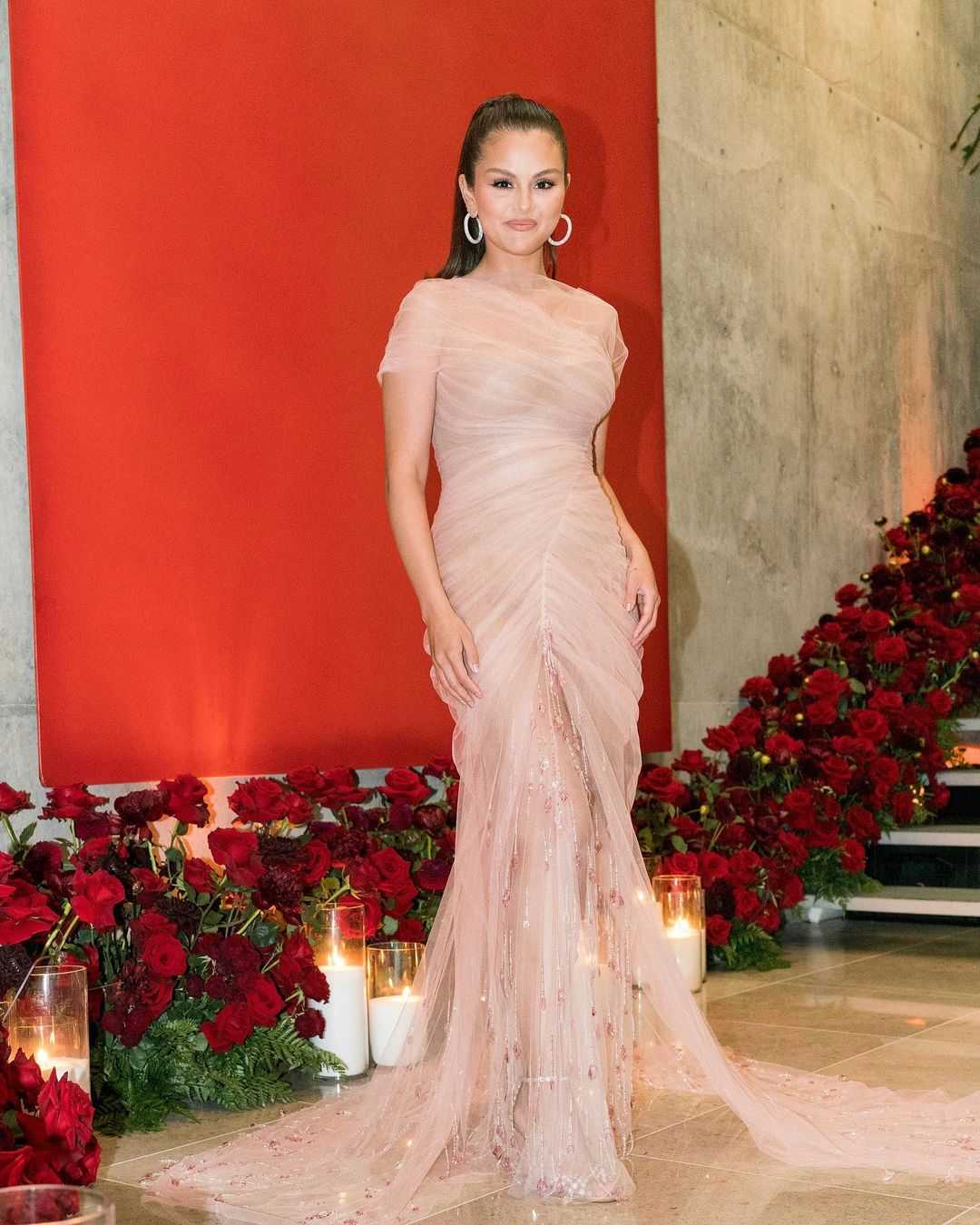 Selena Gomez at a restaurant in Paris on July 7

Selena Gomez In Paris on July 8